A Story About Scaling Avalanche: Subnets

Avalanche is one of the most impressive L1s in the space of Web 3 world currently. With a Market capitalization of 23$ billion and a TVL just above 11$ Billion, Avalanche ranks 10th in the list of all crypto projects according to Coinmarketcap.com

Even more impressive is that Avalanche has achieved this growth without its core value proposition. Avalanche’s subnet architecture will lead the protocol’s future scalability by introducing the ability to create custom blockchains with a specific subset of Validators.

Subnets are an innovative idea for scaling blockchains that are inspired by sharding. In simple words, Subnets create separate and connected instances of the identical blockchain. The difference between sharding and Subnets is that Subnets are algorithmically generated and are launched custom by users or projects.

Avalanche currently has three leading Blockchains, which are utilized for different reasons:

The C-Chain API enables the implementation of smart contracts on the network and is an Avalanche-powered Ethereum Virtual Machine instance.

The P-Chain is Avalanche’s metadata blockchain, which organizes validators, keeps track of current subnets, and allows for the establishment of new subnets. The P-Chain implements the Snowman consensus protocol.

Clients can use the P-Chain API to construct subnets, add validators to subnets, and create blockchains.

The X-Chain (Exchange Chain) functions as a decentralized platform for creating and trading digital smart assets.

The Avalanche Virtual Machine is used by the X-Chain (AVM). Clients can use the X-Chain API to generate and exchange assets on the X-Chain and other instances of the AVM.

Most of Avalanche’s traffic runs on C-Chain, an EVM allowing for Dapps to be deployed and run efficiently.

The P Chain is in charge of coordinating Avalanche validators and is the chain used to construct and administer subnets. It is possible that in the future, we will see a tone of Subnets deploy on the P-Chain

Avalanche allows for infinite subnets to be created, which is the network’s secret sauce to scaling. Each time a subnetwork gets used up a new Subnet can be created. Subnets can also be launched within subnets with the same design principles.

These are the blockchains that are currently deployed on Avalanche: 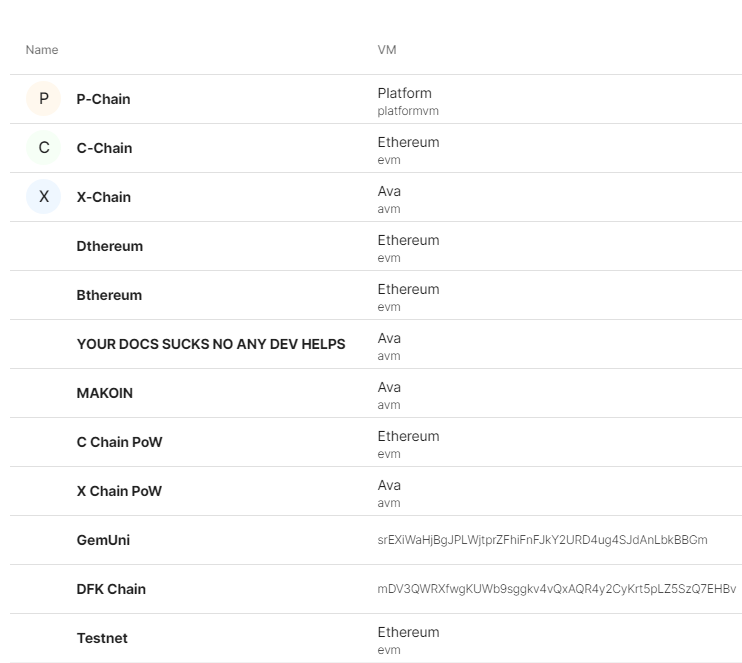 Subnets are essentially the L2s of Avalanche but without sharing the security of the main network while anyone can build a Subnet as long as they burn 1 AVAX.

By building a Subnet on Avalanche, developers gain access to a set of Validators than can secure their network.

All Validators validate the Primary Network but can also validate different Subnets. Each Subnet can have its unique token that can be staked with AVAX for additional security.

The incentives of validating a Subnet can vary. Validators could earn rewards on the Subnet’s native token, significantly increasing the yearly reward of running an Avalanche validator.

It is also possible to validate different subnets with a single validator making the process incredibly profitable for those who choose to invest in an Avalanche validator.

Subnets are the most agile solution we’ve seen in blockchain scaling so far.

Avalanche is a fast and secure blockchain with infinite scaling capabilities that is also future-proof. Different strategies can be deployed quickly without switching to another solution, as you can use the same native asset and network.

In the future, we will see different ideas getting deployed on Subnets that utilize the technology to achieve various goals making Avalanche home to multiple different niches.

Eventually, someone will create a VM that is superior to all other VMs, and everyone will adopt it. This VM, which will also launch on Avalanche, will be the winning condition of our favorite L1 as more and more developers will rush to become part of the ecosystem!

The integration will tokenize reinsurance, making it more widely available beyond its…